You are here: Home / Deodorant vs Antiperspirant

Deodorant vs. Antiperspirant – What Are the Differences (if Any)? 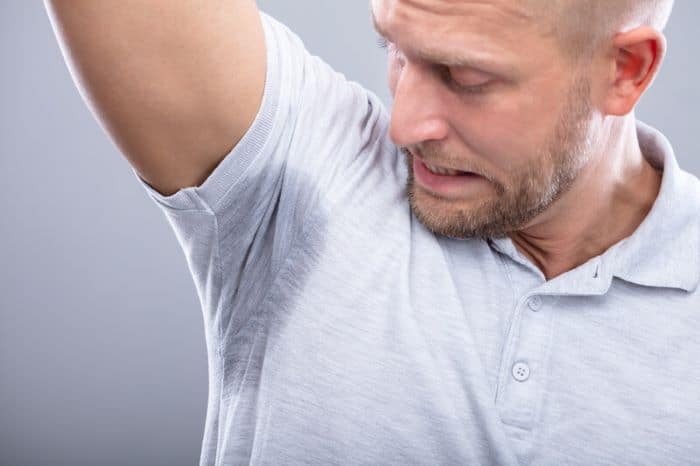 Contents show
1 Why Do Armpits Smell Like Sweat?
2 What Is the Difference between Deodorant and Antiperspirant?
3 Which Is Best?
4 Is Antiperspirant Dangerous?
5 Is the Aluminum in Antiperspirants the Same as in Alum Blocks?
6 Do All Deodorants Contain Alcohol?
7 I Avoid Anything That Contains Perfume. Do I Have to Drop the Deodorant?

Humans have three types of sweat glands: eccrine, apocrine, and apoeccrine sweat glands. Sweat odor comes primarily from the apocrine glands. They are located in the armpits, around the groin and nipples and are activated during puberty. Since the armpit forms a cavity (and is often covered with hair) the sweat evaporates more slowly here than on the rest of the skin.

Sweat in itself smells almost nothing. However, it provokes multiplied bacterial growth, and these bacteria break down the sweat into fatty acids. It is this breakdown that releases body odor. What your sweat actually smells like is hormonally determined and is influenced by, among other things, your diet. Certain diseases, such as diabetes, can provoke an increased odor.

The most important thing you can do to get rid of intrusive body odor is to remove bacteria in the sweat regions, i.e. regular cleaning with a good shower gel. Most people use a deodorant or antiperspirant as well to keep their body odor under control throughout the day.

What Is the Difference between Deodorant and Antiperspirant?

Antiperspirant stops sweating, while deodorant stops the smell of sweat. They have completely different behaviors and contain different ingredients that are useful to be aware of.

Antiperspirant contains aluminum chloride (often simply called aluminum). This is a synthetically produced salt that absorbs into the skin, swells up when it comes in contact with sweat and thus blocks the sweat ducts. In other words, with antiperspirant you will sweat less.

Antiperspirants are available as roll-on, stick and wet wipes. Be sparse with the application.

Deodorant, on the other hand, reduces and camouflages the smell of sweat. They usually contain bactericidal substances and odor. The former removes the bacteria that are responsible for the body odor itself, the latter camouflages the odor with a pleasant scent. In other words, a deodorant can be considered as a soap that remains on the skin.

Deodorants are available as roll-on, stick or spray. Make sure that the armpit is well dried before application so that the deodorant does not foam.

As a general rule, the body is supposed to sweat. Sweat regulates your body temperature and is an important part of fluid balance. For this reason, we recommend deodorant to most people. However, there is no scientific evidence to suggest that the body excretes significant amounts of toxins via sweat, so go to the sauna because you like it rather than because someone has called it a “detox treatment”.

However, antiperspirant is more effective than deodorant. If you are particularly bothered by sweat/ sweat odor, you can try antiperspirant from Maxim , Jack Black , Salt & Stone All Natural Deodorant , D.R. Harris  who beats everything else we’ve tried. They do not contain the variant of aluminum (aluminum zirconium tetrachlorohydrate) which gives yellow stains on clothing.

The aluminum chloride in antiperspirants is absorbed into the body. One should not exaggerate how harmful this is: No association has been shown between the small dose of antiperspirants and general health problems (such as cancer) in humans.

However, according to Healthline:

Medical research shows that aluminum from antiperspirants can build up in your body. There’s no scientific evidence that directly links aluminum to cancers and other health conditions, though. Plus, you’re more likely to get aluminum from other sources. Still, this medical evidence leads experts to advise that antiperspirant use isn’t a good idea for everyone, especially those with severe chronic kidney disease.

In animal experiments, aluminum chloride has been shown to have low toxicity in large doses and there is reason to believe that it may aggravate existing kidney disease.

Is the Aluminum in Antiperspirants the Same as in Alum Blocks?

No! Alum blocks consist of potassium-aluminum sulphate which is a natural mineral extracted from slate. These molecules are too large to be absorbed into the skin and instead lie on the outside and crack microorganisms (read more about this in our alum guide).

Since alum is a gentle antiseptic, it is a popular aftershave, but for the same reason it is also used as a mild, fragrance-free deodorant – especially in Asia. All you have to do is moisten the alum block and rub it against the skin. Try for yourself! Example: Bloc Osma Alum Block  Note: If you are bothered by a strong smell of sweat, you need a heavier deodorant than just alum.

Do All Deodorants Contain Alcohol?

Alcohol is often used as a bactericidal substance in deodorants. Since alcohol is also fat-releasing, it can unfortunately remove the sebum (natural oil) in the skin and contribute to dry skin. Alcohol is also used as a solvent in almost all perfumes, therefore all deodorants that contain perfume will also contain a small amount of alcohol. Both alcohol and perfume can trigger allergic reactions.

If you have allergies or sensitive/ dry skin, you should rather choose a non-alcoholic deodorant, of which there are fortunately many. These are instead based on antiseptic plants, such as eucalyptus and tea tree oil, to remove odor-forming bacteria.

Other natural ingredients such as kaolin clay extract moisture and give a fresh feeling. Be aware that such deodorants are milder than their alcoholic siblings and sometimes need to be applied twice daily.

I Avoid Anything That Contains Perfume. Do I Have to Drop the Deodorant?

Luckily not! You can choose between: