You are here: Home / How to Find Razor Blade Combination

How to Find the Right Double-Edge Razor Blade Combination for You? 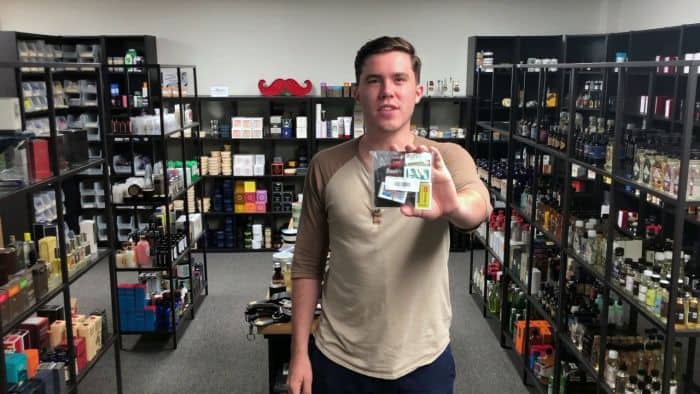 One of the biggest advantages of traditional safety razors is that you are not tied to one brand of razor blade – you can mix and match double-edge razor blades from many different manufacturers until you find the one that best suits your beard growth and other preferences. In this piece, we will help you a little along the way!

Contents show
1 Free Market
2 Important Differences
3 Grinding
4 Coating
5 How Long Should a Razor Blade Last?
6 How Do I Get Rid of Used Razor Blades?

If you are unsure or want to experiment, we recommend a DE razor blade sampler pack  with the 15 most popular brands at a heavily discounted price. As a rule, we recommend “mild” blades for beginners and the sharper types when you are more experienced.

This is in contrast to multi-blade systems, where manufacturers deliberately introduce and patent new multiple blade cartridges that only fit their own razors. It is common to offer the razor itself at a very affordable price to lock the customer on to the extremely profitable razor blades, a bit like Playstation consoles can only play Playstation games.

Since the format of safety razor blades is fixed, the manufacturers must instead differentiate themselves on quality differences, i.e. properties of the blade that give specific results with the shave.

There are essentially two characteristics that distinguish traditional safety razor blades from each other.

The actual steel in the blades is largely the same. Almost all razor blades today are made of stainless steel, a steel to which has been added chromium to give a harder edge and prevent corrosion. Therefore, most types are called “Stainless” in one form or another. Steel that contains less than 11% chromium is not officially stainless and is instead called “Chrome”, but can withstand corrosion during the life of the razor blade.

The razor blades are punched out of a steel belt and the edge is sharpened several times. The thickness of the belt and the angle of the edge vary from brand to brand. The blade itself can be from 0.04 to 0.4 mm thick, while the tip of the edge can measure down a few nanometers. This affects how the razor blade cuts the hairs.

Feather  from Japan is known for being sharpened extremely sharp and thus glides more easily through thick beard growth. However, those with milder beard growth and sensitive skin may find that the extreme grinding angle irritates the skin, and prefer “kinder” sharpened blades such as Derby Extra  or Merkur Razor Double Edge Razor Blades . These have a rounder edge that maintains mild beard growth and does not scrape that hard against the skin.

Mild and medium sharp razor blades do not require as much skill as the sharpest to avoid cuts and irritation; therefore, we recommend the former to beginners.

The razor blades are provided with different coatings to increase durability and provide better glide. This process is called “sintering“. Note: By coating we mean the the surface treatment of the steel itself, not the two wax beads that hold the paper packaging firmly around the blade inside the box. This wax has no consequences for the shaving.

The edge is usually covered with Teflon (also called PTFE or more generally “polymer”) which provides lower friction against the skin. Teflon is not able to bind to stainless steel directly, so the razor blades are “primed” with other substances similar to Tungsten first. Some of the most popular razor blades are plated with platinum along the edge to ensure durability. None of the coatings used in the razor blades are absorbed into the skin and none of them are allergenic.

The coatings reflect how smooth the razor blade feels against the skin and how many shaves it can handle. The blades from Astra Superior  and Mühle , as an example, are known to glide well for many shaves, even if the grinding angle itself is not the sharpest. For this reason, they are popular all-rounders that suit most people.

Shaving can change character as the coatings wears away. Many people find that the second and third shave are the best, even better than the first shave. This is especially something to keep in mind if you have sensitive skin.

How Long Should a Razor Blade Last?

A sharp blade slides without resistance over the skin. A dull blade will gradually begin to pull against the hair, and you will have to pass an area several times to remove all stubble. The life span of a good razor blade depends primarily on your beard growth. Men with extremely thick beards can expect 4-5 full shaves, while most men can expect 7-10 shaves before it gets dull. If the blade gets dull before these numbers, switch to a sharper type of blade.

To a certain extent, this is a matter of taste. Some people would rather throw away a razor blade after 3 optimal shaves than expose themselves to 4 more shaves that take marginally longer time, while others hardly notice a difference. Since traditional safety razor blades are both recyclable and cheap, this is not a big issue.

How Do I Get Rid of Used Razor Blades?

A big advantage of traditional DE razor blades is that they only consist of steel that can be easily recycled. The micron-thin coatings do not affect this. Multi-blade cartridges, on the other hand, consist of plastic, rubber and steel, which even the manufacturers admit cannot be recycled.

Traditional razor blades are disposed in metal recycling. To avoid cuts both for you and for garbage workers, we recommend collecting them in a container that you can then throw away. The very best is a specialized blade bank , but you can also use a can that is also recycled as metal.

Remember to always handle razor blades carefully and keep them out of the reach of children. Even worn-out razor blades are sharper than any kitchen knife. Nearly all traditional razor blades have two unsharpened rims along the short sides that you can hold in to avoid cuts.