You are here: Home / How to Pick the Right Beard Style for Your Face Shape 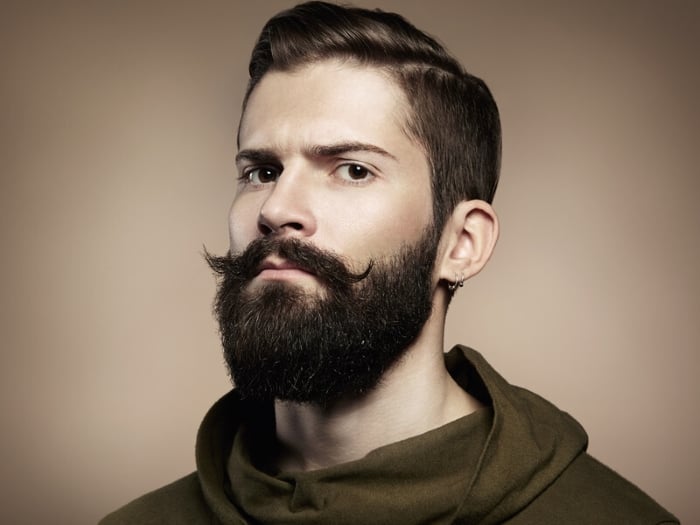 What we are looking for when we style a beard is to put a shape that flatters the face, i.e. highlights your features in the best possible way. Different face shapes require different beard shapes: A beard that looks good on one man can look strange on another. Read on to learn the basic guidelines.

Contents show
1 How the Beard Grows
2 How to Make a Shape on the Beard
3 Different Face Shapes
4 Why Does the Barber cut the Beard so short?

How the Beard Grows

For most people, the beard grows equally over large parts of the face. In other words, if you don’t shave for months, your beard will have a fairly long, but equal length everywhere. This will almost never look nice. The most common challenges are:

How to Make a Shape on the Beard

A good beard trim puts different lengths on different parts of the beard to build a consistent shape. To know how long the beard actually is, it must be blow-dried and straightened with a beard comb before grooming, otherwise you risk that the length will be completely different after the next shower.

It is also much easier to shape beards that are softened by beard shampoo. Beard that has been dried out by hair shampoo or facial cleanser gets split ends and becomes too stiff to put in shape (read more about this here).

An oval face is naturally symmetrical and fits with most beard styles. If you have this head shape, you can pick & choose.

A round face shape looks best with a short beard on the sides and a little longer under the chin.

Your face is wide with sharp angles. To get symmetry, you should keep the beard shorter on the sides and grow it further down. Feel free to round it off a bit when the beard has lengthened.

You have a narrow forehead and a face that gradually widens down towards the jaw. This means that you already have a wide face shape where you want to grow a beard. We recommend either going for a shorter beard or getting enough length on it so you can trim it short on the sides and narrower down the chin.

Your face is long and narrow, but with a rectangular chin. For you, we recommend shortening it down a bit at the bottom and filling in something on the sides. This way you get better symmetry in the face.

You have a narrow forehead and jaw, but a wide cheek. For you, we recommend keeping it short on the jaws and using the length down to shape the beard into a more oval shape.

Why Does the Barber cut the Beard so short?

It takes time to grow a full beard. In order for your barber or hairdresser not to waste months of saving, it is crucial to have good communication in advance. If you stand and trim your beard in the bathroom, you know how you want it. But it is not necessarily that a barber knows what your plans for the beard are. In the following we will try to describe the logic of a good barber so that you better understand why they do as they do.

Barbers are primarily looking to create a working shape. As I said, this mostly depends on the beard being the longest at the tip of the chin – everything else must be trimmed shorter. For example, if you have bled by stroking your chin more than your cheeks, the barber will try to correct it by stroking your cheeks as well.

Some men with fairly thin beard growth are able to grow parts of the beard far to compensate. In some cases, it is impossible to make this beard look tight and well-groomed with its current length and the barber’s instinct will be to cut it shorter.

A self-respecting barber will also try to trim away chipped/ worn tips. The more of your beard that is worn to pieces, the more beard they need to remove. Be careful with beard shampoo and beard moisturizer to avoid this.